After a long two years Simcoe Little Theatre is looking forward to welcoming our audience back this spring and summer! As the snow piled up our incredible production team has been hard at work selecting the shows for this year, building sets and preparing the theatre for your return, all while adapting to the fluctuating Covid-19 regulations.

We are delighted to share that SLT will stage two plays filled with mystery, mayhem and laughter. Starting in late April with “Murder At The Howard Johnson’s” which will be directed by Sarah Finch, followed by “The Hound of the the Baskervilles” in June directed by Melinda Campbell.

Keep an eye here and on our Facebook page for a full season announcement with play descriptions and performance dates coming soon! It’s time for us to get back on the stage and you to be back in your seats filling our theatre with laughter and joy. The lights have been down on SLT too long.

Simcoe Little Theatre and Lighthouse Festival Theatre came together earlier this year to form a relationship that both parties are proud of and excited about.

Simcoe Little Theatre (SLT) has been a wonderful community theatre for decades and now with the assistance and support of Lighthouse Festival Theatre, SLT’s future is secured.

Unfortunately, an advertisement was recently taken out in the Simcoe Reformer which suggested that a Special Meeting of SLT would be held on August 11, 2021. The advertisement also made its way onto Facebook.  The advertisement did not come from the theatre and SLT’s logo was used without our permission.

For clarity, SLT did not authorize or publish the advertisement. SLT has not called a Special Meeting.  Any money being requested from the public in the advertisement has not been requested by SLT.  Any payments made to those who placed the Ad will not be to SLT and will NOT result in a membership with SLT.

We sincerely apologize for the confusion the advertisement’s publication has caused.

SLT and Lighthouse have developed an incredibly exciting agreement that was vetted by both corporations’ legal counsel. Under the agreement, SLT’s mandate as a volunteer-run community theatre will be maintained. We believe that while Lighthouse provides administrative and artistic oversight, in addition to assuming all financial obligations, liabilities, and maintenance of the building, the volunteers and patrons of the SLT community will be able to thrive going forward.

SLT is very proud of the hard work that has gone into creating this relationship and is ecstatic about what this means for our future in this community as a volunteer run theatre. This agreement will ensure a successful and sustainable future going forward.

We look forward to updating the public with more about this exciting new relationship, so please stay tuned. For any official updates, you can check our website and follow us on Facebook! We cannot wait to see everyone’s faces back in our favourite little theatre.

Lighthouse Festival and Simcoe Little Theatre have come together to secure a vibrant future for the community run theatre. The new relationship will see Lighthouse Festival manage the theatre building, providing resources and leadership in facility upkeep, administration, technical effects and artistic guidance. By leveraging Lighthouse’s resources and facility management experience, local community artists can continue to dream and inspire on the Simcoe Little Theatre stage. The new relationship gives SLT the security to be viable for generations to come so that as a volunteer run organization it may continue to entertain season after season and realize it’s mandate to joyfully create a first-rate community theatre experience for people of all ages and abilities.

“It isn’t often that we have the opportunity to witness, and play a small role in, impacting future Arts and Cultural development in our community.  But that is exactly what has happened as Simcoe Little Theatre and the Lighthouse Festival have concluded a collaborative agreement, whereby SLT will continue as a Volunteer Community Theatre with the professional assistance and expertise of LFT,” explained Richard Gilbert, SLT President.

“As far as I can tell this will be the first time in Canadian theatre history that a Professional theatre and a Community theatre will have joined forces. I love the idea that we will be making history together,” said Derek Ritschel, Artistic Director for Lighthouse Festival. “By joining forces, Simcoe Little Theatre will be able to leverage Lighthouse’s professional theatre capabilities; and Lighthouse will be able to ensure that Simcoe Little Theatre will be a place for local artists to create and inspire for decades to come. I can’t wait to watch them shine.”

Simcoe Little Theatre has maintained a proud tradition of a community theatre run by the community for the community. Lighthouse could not be more honoured and proud to support and empower all the community artists who will continue to entertain the next generation of theatre lovers.

Our production of “Save The Theatre” has been postponed until September

24th, conditional upon the COVID-19 social distance guidelines being

Thank you for your patience. 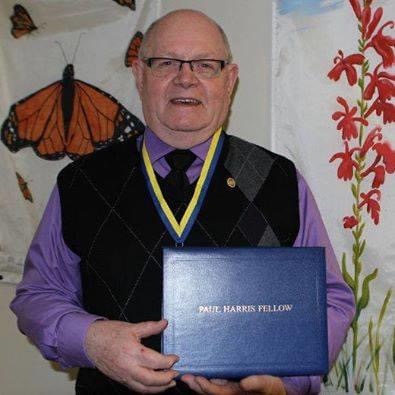 Throughout his life, Larry Dawson worked tirelessly to promote Simcoe and the Norfolk region. He showed his love for his community by involvements in a number of community agencies, as an active member, and in a variety of leadership capacities (Board Member / Secretary / Treasurer, President / Past President, etc.) for many agencies and organizations in this area.

Larry also served a term as Municipal Councilor for the Township of Norfolk, and was the County appointee to both the Tourism and Economic Development Advisory Board, and to Norfolk’s Committee of Adjustment.

Larry’s lifetime of commitment and service to his community was recognized and honoured as follows:

·         Co-winner of the International Crime Stopper of the Year

His contributions to the theatre community were many and varied, spanning many years. In particular he was involved with Simcoe Little Theatre (SLT) for over 30 years filling many roles, e.g. president / past-president / fundraising chair to name a few! SLT honoured his commitment and service by making him a Life Member in 2016. He always provided leadership and support, and he worked tirelessly in support of SLT’s goal to provide opportunities for people in Norfolk County to participate in and enjoy top notch quality live theatre.

During his 30 years with the theatre, he was very involved in all aspects of production, (actor, producer, stage manager, director, etc.) In total he produced two, stage-managed four and performed in twenty-four plays with comedies and musicals as his specialty. But he also demonstrated his versatility and creative range when he took on a dramatic role in SLT’s production of Leanne Brodie’s Book of Esther.

His forte was his support of / participation in the creative side of community theatre. He served as SLT’s Technical Director which entailed being fully knowledgeable about every aspect of stage craft and production and used this knowledge to provide orientation, instruction and support (including crisis management!) to the Production Directors, casts and crews of all productions presented by SLT – a mammoth job! Even after he retired from this role, he continued to support new Directors in whatever way he could, e.g. Producer, Stage Manager, Advisor, etc.

According to Louise Banfield, also a Life Member and currently SLT’s Box Office Manager, Larry was:

“someone you could always depend on – a true leader! He helped out many new directors and gave many an actor their first roles …. He provided many of the props and costumes he used, especially ones where he appeared in a female role.

Louise goes on to say:

“Larry’s production of Cinderella possibly holds the record for the largest house in SLT’s 75 years of existence. The numbers always went up when Larry was involved because he knew so many people and they always came out for his shows. His laugh was infectious. When he was in the audience, he could always be heard and he would lead the audience in laughter.”

In terms of cast, crew and audiences, the volunteer contributions of his skills and expertise reached hundreds of people in Norfolk County. In particular he enjoyed the opportunity to watch many young people go forward and further their education in theatre arts.

While Manager for the Simcoe Town Centre in Simcoe ON, Larry created the TC Bear mascot that soon became a large part of the community and an integral part of a public school program about the consequences of shoplifting.

Larry expressed gratitude that his acting talents enabled him to create TC Bear and provided him with rewarding opportunities to engage with over 25,000 young students and more than 100 teachers while impressing such an important message on them.

During 2017, Larry performed at many venues and occasions representing Norfolk County as Charlton – our Canada 150 mascot / representative (see attached).

The following comments are from two individuals who worked with Larry Dawson for many years and they demonstrate the impact Larry has had on his community, and on community theatre in particular.

Heidi Bowman (SLT Board member in many capacities, including President and Past-President) worked with Larry Dawson for many years and speaks to his impact on his community, and on community theatre in particular.

“I got to know Larry Dawson when I first joined Simcoe Little Theatre in 1994 as a volunteer myself (make-up and ushering). Larry directed a play that season, Alone Together, and a musical, Cinderella, in the following season. These were just two of the 17 productions that he directed for Simcoe Little Theatre over the years. I had the privilege of being part of the cast of the musical Oklahoma which he directed in 2005.  ….  The arts enrich the life of a community and Larry was an integral part of the performing arts in Norfolk County. His roles and performances for the Simcoe Lions Club annual show were legendary; he directed shows as fund raisers for the Langton Figure Skating Club, his TC Bear persona was especially captivating for children and his involvement with Simcoe Little Theatre was extensive.

Larry had the ability to reach out to people and encouraged them to participate and to do their best. He did this in his work as Manager, Simcoe Town Centre, and Executive Director, Simcoe Downtown BIA, with his staff (included my son), and the public. He demonstrated this in his activities around the community, Norfolk County Fair, Simcoe Community Policing, and Old Windham United Church. He drew out the inner muse of the actors on stage, to deliver the best performance to an appreciative audience.

Larry had a “Let’s go for it, let’s do it” attitude that was an inspiration to many. Because of Larry Dawson, Norfolk County was and is a richer community.”

Douglas Grant, (SLT Vice- President until 2017 and now a Life Member of SLT) also worked with Larry for many years

“Since the late 1970’s, Larry served as Director on fourteen registered not-for-profit organizations, was Past President for six of these organizations, and Secretary/Treasurer for four of these causes.

At Simcoe Little Theatre, Larry s more than proved his expertise and versatility. As actor, producer, director, Executive President, Technical Director, he was a “common-sense go-to person” who positively influenced every aspect of this long-time volunteer driven and run organization.

In his professional life, Larry was a fervent champion of retailers, both in malls and down-town outlets. The Norfolk retail business community has much to thank Larry for.

Larry’s passionate and sincere involvement as a volunteer touched the lives of literally thousands of people of all ages from so many walks of life. His continued interest in youth insured our communities are age-inclusive and open to the input and diligence of young people.

My words merely scratch the surface of Larry’s hard work, initiatives and successes as a volunteer; he loved people and that is why his life made so much difference.”

Larry Dawson was one of a kind and will be greatly missed!